Into the Sea - An Audio Visual Timelapse Art Project

Recently I’ve had the pleasure to work with a very talented artist - Rachel Foos. I stumbled into one of her great timelapse spray-painting videos (which I highly reccomend you watch and support) and had an idea - what if I created the music for one of her videos? I could contribute tailored sounds to the scene she was painting, superimpose sounds from the scene where she is painting, and try out a host of other things. I absolutely love working with other artists and find that it’s really easy for me to draw inspiration from anything visual. Rachel agreed, and thus this project was born.

Rachel showed me several of her works, and I naturally gravitated towards a more abstract, underwater scene of floating, almost ethereal jellyfish. I’d like to think the eminating orb of light shining out from the bottom hinted towards an almost divine, magical interpretation of the ocean. (An interesting caveat - turns out the image below is actually of flipped orientation, and you can see the correct orientation in Rachel’s YouTube video below. This is rather obvious now, considering that reefs are at the bottom of the ocean. This of course means that my “eminating orb” is actually just the sun. Nonetheless, I think my interpretation is still a little valid.) 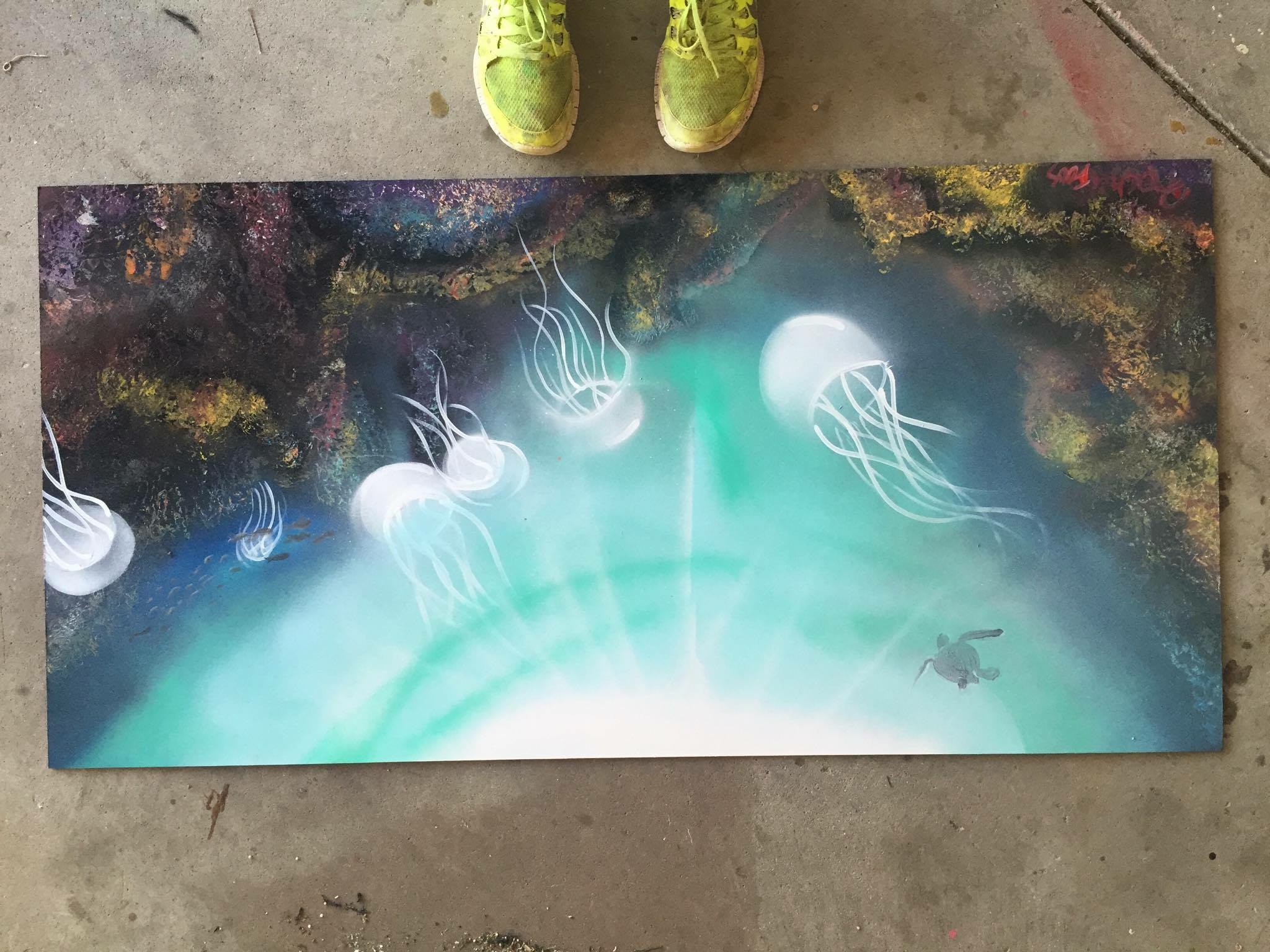 I sought out examples from artists I love.

Listening to the Port Blue example above, at around :30 seconds, you can almost imagine waves crashing along with the song. This is done using some ingenious music devices, namely the snares / claps that don’t hit directly on each other but sort of “fall into place”, and a synthesizer pad (pad - a sound that occupy space, often with reverb, chorus effects, stereo widening, etc) that swells and falls in rhythm. The drums sound organic and raw. Other than just musical elements, there’s a lot of other sound effects coming into play, most likely things that were recorded from something like a field recorder. This adds to the ‘organic’ feel of this brilliant song. There’s actually so much going on in all of Port Blue’s songs that I could probably write an analysis for every one. This will have to do for now.

Secondly, Tycho is a huge inspiration, and maybe it’s largely due to the album artwork, but his music often reminds me of an ocean scene, albeit a calm, tranquil one. All of Tycho’s songs feature soft, melodic leads, reverb drenched pads, and usually silky guitar. It’s easy to see how I drew inspiration from this into my song.


From all of what I’ve described, the song was born. I wanted the drums to sound largely ‘real’ and ‘unprocessed’, with a gritty, raw, almost ‘vinyl’ like feel to them. The main synth pads swell and release, much like how a jellyfish swims. There’s a female vocal sample blended in throughout, that sounds almost like a divine mermaid. It’s obvious I’m superimposing ocean recordings throughout, but maybe less obvious are the sounds of someone shaking a spray-paint canister.

Overall, I couldn’t be happier with the end product, and it was great to work with Rachel.